Types of pain and vicious circle: 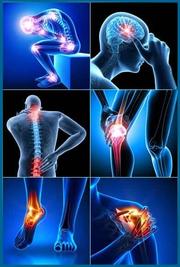 Feeling “pain!” is an important sign that informs us that something is wrong with our bodies.
When tissue is injured, such as by cutting or burning, a “pain substance (neurotransmitter)” leaks from the area around it, which is converted into an electrical signal that travels from peripheral nerves to sensory nerves, it is transmitted to the brain recognized as “pain”.

Pain can be caused and conditions vary from a common injuries or headaches to a first time experiencing pain after getting ill. Not all “pains” can be clearly classified, but they are mainly classified as follows. 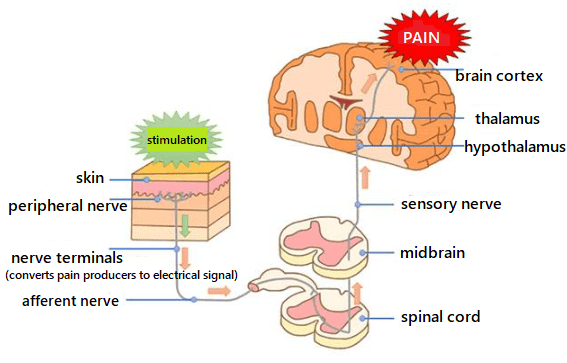 Pain can cause tension of sympathetic nerves and muscles, and can have major adverse effects on the circulatory and respiratory systems, such as elevated blood pressure, increased heart rate, vasoconstriction, and increased respiratory rate.

It is desirable to treat and improve immediately when you feel “pain”, but if you tolerate it and leave it alone, you will end up in a “vicious circle of pain” that creates new pain, which will become chronic pain and prolong the painful state. 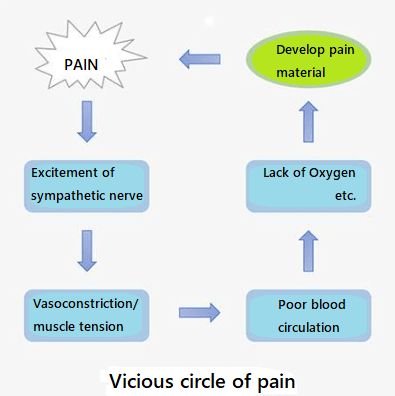 Here, is an introduction of the research on the action of Asaigermanium on “pain” conducted by Asai Germanium Research Institute.

Experiment ① Analgesic action by acetic acid writhing method
Test
A single dose of 30-400 mg of Asaigermanium per kg body weight is administered subcutaneously to a mouse, then a substance that causes pain (0.7% acetic acid-saline) is administered intraperitoneally 30 minutes later. Asaigermanium Research Institute measured the counts of writhing (twisting due to pain) that occurred in 10 minutes after the 5 minutes.
Result
Compared to the group that did not receive Asaigermanium, the group that received Asaigermanium was confirmed to have an analgesic effect as the count of writhing was reduced as the dose increased. It has also been confirmed that the combined use of the analgesic morphine and pentosidine with Asaigermanium significantly enhances the analgesic action. 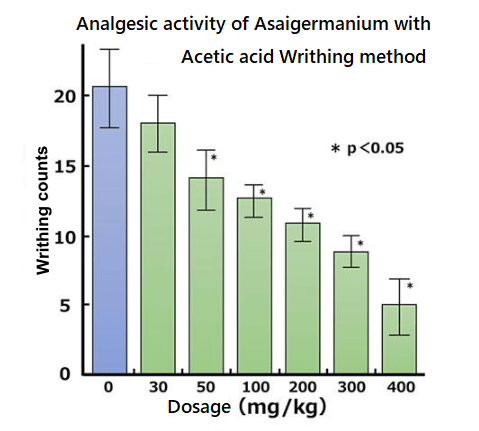 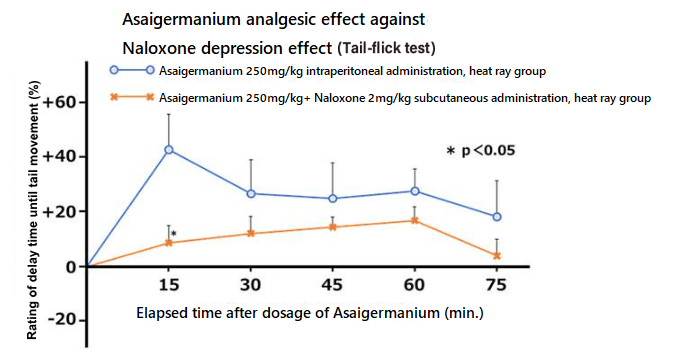 Some analgesics, like morphine, are narcotic analgesics (opioids) that act on proteins called opioid receptors, but some opioids are made in the body. Therefore, it is considered that Asaigermanium exhibits analgesic activity through activation of the endogenous opioid system, which is an analgesic system in the body.

* naloxone: A substance that suppresses excessive action such as morphine. Opioid antagonist.

Clinical trial ①Clinical evaluation of subjective symptoms in lung cancer patients
Cancer patients often feel pain, and it is said that 30% feel pain in the early stages, and 70% in the end stage cancer.
Test
In a multi-institutional double blind contolled study* , the following two groups were examined for subjective symptoms such as pain, loss of appetite, and general malaise in patients with unresectable lung cancer.
(1) A group ingesting Asaigermanium based on 50mg / kg per day
(2) Placebo group (groups that did not contain Asaigermanium)
Result
The trend of improvement in pain was slightly higher in the Asaigermanium group. The aggravation rate is significantly reduced in the Asaigermanium group. A simultaneous evaluation of “anorexia” and “general malaise” also revealed that taking Asaigermanium significantly improved. 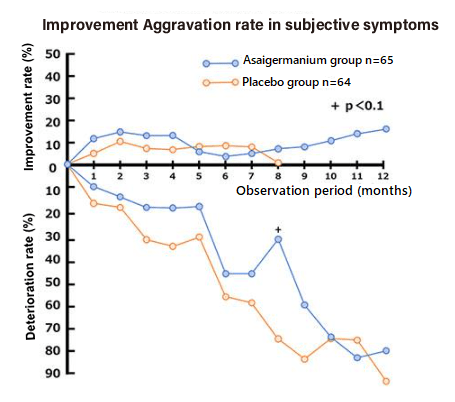 Asaigermanium has been shown to have an analgesic effect to reduce “painfulness” in basic and clinical trials. As one of the mechanisms, it has been shown that pain may be suppressed through activation of the opioid analgesic system produced in the body. On the other hand, it is also known that Asaigermanium does not have side effects such as clouding of consciousness, dependence and constipation like seen in morphine, a narcotic analgesic.
The research on “pain” and “Asaigermanium” is still ongoing.