“Inflammation” is a defensive reaction that tries to remove and repair harmful things when a body receives the damage. Inflammation can be caused by physical factors such as injury (spraining, bruising, etc.), and biologically caused  by pathogenic bacteria such as when catching a cold. 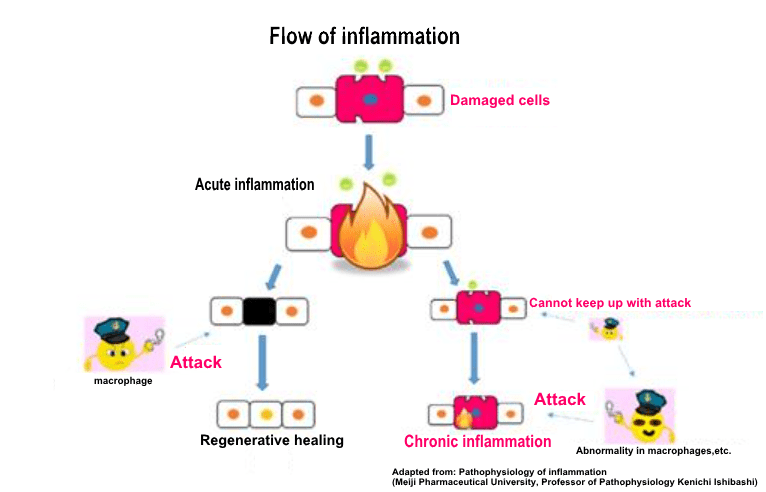 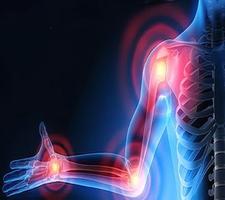 Here, is introduction of research on the action of Asaigermanium on “rheumatoid arthritis” which is classified as chronic inflammation (autoimmune disease) conducted by Asai Germanium Research Institute.

What is rheumatoid arthritis?

Rheumatoid arthritis is caused by an abnormality in the system called “immunity” that protects the body from external enemies such as bacteria and viruses.

In joints with rheumatoid arthritis, the synovial membrane grows and it responds to immunity and starts to attack the joints, causing swelling and pain. This prevents the joints from normal functioning.

Recently, it has been found that rheumatoid arthritis is caused by the production of a protein responsible for information transmission between immune cells called cytokines * . If it is produced in large quantities over a long period of time, the inflammation will last longer, and if the symptoms worsen, it will affect the ligaments and bones and gradually deform accompanied by pain.

* Among cytokines related to inflammation and immunity, IL-1, IL-6, and TNF-α are known as pro-inflammatory substances (substances that promote inflammation). In particular, IL-6 and TNF-α both activate osteoclasts that break bone. The longer the pro-inflammatory substance is produced, the greater the pain and deformation, as osteoclasts continue to be active.

Adjuvant * arthritis model is a pathological model that reflects to human rheumatoid arthritis.

The bones of the limbs on the 25th day after the adjuvant injection were observed with soft X-ray photographs, and the bone destruction of the groups administered with physiological saline seemed to be progressing. In the Asaigermanium administration group, bone lesions are also suppressed, and the state is similar to the control group.

* Adjuvant: A non-specific immunostimulator (antigenic reinforcing agent) that has the effect of enhancing the immune response of cells.

Effects of Asaigermanium on rheumatoid arthritis

17 patients with rheumatoid arthritis took 1500 mg of Asaigermanium per day for 6 months, interview to patients as their doctors determined their condition.

9 people were judged to be better (effective)than the same season 1-2 years ago, and 6 had improved number of painful joints, morning stiffness, and daily activity (improvement) , 82.4% of overall patients had some type of effect.

15 out of 17 patients who took Asaigermanium was seen with increased production of interferon (IFN) *1 . Interferon has an immunoregulatory function, but it has been shown that rheumatoid patients decrease the production. The other indicators *2 also have shown trend of improvement.

*2 CRP: A protein called C-reactive protein that elevates in the blood when inflammation occurs in the body. If inflammation is occurring, this number will increase.

It was found that administration of Asaigermanium to a rheumatoid arthritis model in rats significantly suppresses swelling, and also suppresses bone lesions. In human trials, more than 80% of patients were determined to have improved symptoms by taking Asaigermanium. In addition, production of interferon that adjusts the immune system was also observed, which proved to have a certain effect on rheumatoid arthritis.
In addition to the chronic inflammation introduced here, it has been reported that the effect of Asaigermanium on inflammation is also effective in tests using acute and subacute inflammation models in mice and rats.

7.Naoko Nishimura “Cancers and Chronic Inflammation That I Have Found So far” www.natureasia.com/en-us/nature/ad-focus/detail/100909/1 (in Japanese)